Sometimes, I like my coffee with something sweet.  Today is one of those days. So  I scanned the kitchen and found a single, rotten banana.

Immediately, I began searching for banana bread recipes that were small enough for one banana.  Turns out, there are many!  I settled on a single-serve banana muffin recipe, altered it a bit and doubled it so it would make a small loaf.  Then, I just had to make a sweet vanilla frosting.  The result?  Well, let’s just say I was able to refrain from eating the entire loaf…barely!

*I used half of the original recipe

Mix everything together.  Pour over bread.  Devour in the gooey sweetness. 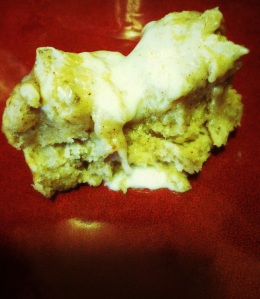 This entry was posted in Breads. Bookmark the permalink.