St. Patrick’s Day: A day when beer (and even bodies of water…Chicago, I’m referring to you) are dyed green and drunken adults stagger throughout the city on school buses via the Erin Express or the like.

Instead of joining the masses in overly-crowded, stale-smelling bars whose patrons decked-out in “Kiss Me, I’m Irish” shirts (even though they’re not Irish) and double-fisting over-priced green Miller Lite’s, I decided to take a more subtle approach to this, er, “holiday.”

In the past, making chocolate pudding meant emptying the contents of a Jello packet into a bowl and mixing with milk.  Since I am confident that my baking skills are a bit beyond that of a second grader’s, I decided to give homemade chocolate pudding a try.  And instead of plain whipped cream, why not add some booze?!

I started by chopping up the chocolate.  Use a super sharp knife for this and your life will be much easier (and you probably won’t even curse while doing it!)

Next, comes the melting of the chocolate.  Since I don’t have my own kitchen (yet), I fashioned my own double-broiler by boiling some water in a pot, then placing a smaller pot with the chocolate on top.

So creamy.  I may have shoved a few spoonfuls in my mouth.

Afterwards, I placed the pudding into the fridge to cool for a few hours.  Then, it was onto the whipped cream.

Let me just state this: The whisk is not my friend!  Despite lifting weights, my arm began to hurt and I had to call in reinforcements (Felix).  However, the result was well worth it. 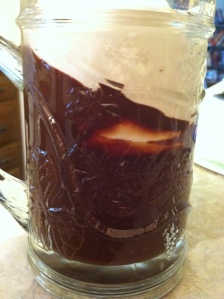 Finely chop the chocolate, then place in double broiler.  Add water, sugar, butter and pinch of salt.  Melt in broiler until combined.

Separate the whites and yolks of the eggs.  Beat the whites until stiff.  Once the chocolate is melted, add the yolks, then fold in the whites.  Once batter is at pudding texture, pour into individual mason jars (or bowls, cups, whatever) and chill a few hours.  Top with whipped cream and serve!

Whisk whipping cream until peaks form.  You might want to enlist the help of a strong man when doing so.  Or just take breaks and chug some Guinness while your hand recovers.  Add in the sugar and the Guinness.  Whisk some more until the thickness resembles whipped cream.  Taste frequently.

*I made twice this recipe and ended up with a boatload of whipped cream, so I recommend using the above recipe.  Unless you like to eat whipped cream by itself (which I might have done…)

This entry was posted in Pudding/Custards. Bookmark the permalink.